What is the cause of abnormal vibration of hydraulic breaker?

We often hear our operators joking that they feel trembling all the time during operation, and feel that the whole person is going to shake apart. Although it is a joke, it also exposes the problem of abnormal vibration of the hydraulic breaker sometimes. , Then what is causing this, let me answer you one by one. 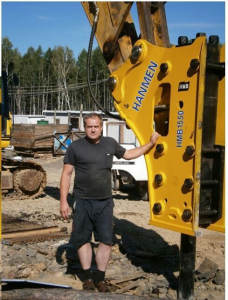 1. The tail of the drill rod is too long

If the tail of the drill rod is too long, the movement distance will be shortened. In addition, when the piston is inertial downwards, the drill rod will perform abnormal work when it is hit, causing the drill rod to rebound, causing the energy of the piston to work not to be released, resulting in a counter-effect. It will feel abnormal vibration, which can cause damage and other phenomena.

2. The reversing valve is inappropriate

3. accumulator pressure is not enough or the cup is broken

4. Excessive wear of the front and rear bushings

Excessive wear of the front and rear bushings will cause the drill rod to get stuck or even rebound, resulting in abnormal vibration